Queer Man Peering Into A Rock Pool.jpg is a surrealist experience grounded in the reality of love.
Leah J. Williams 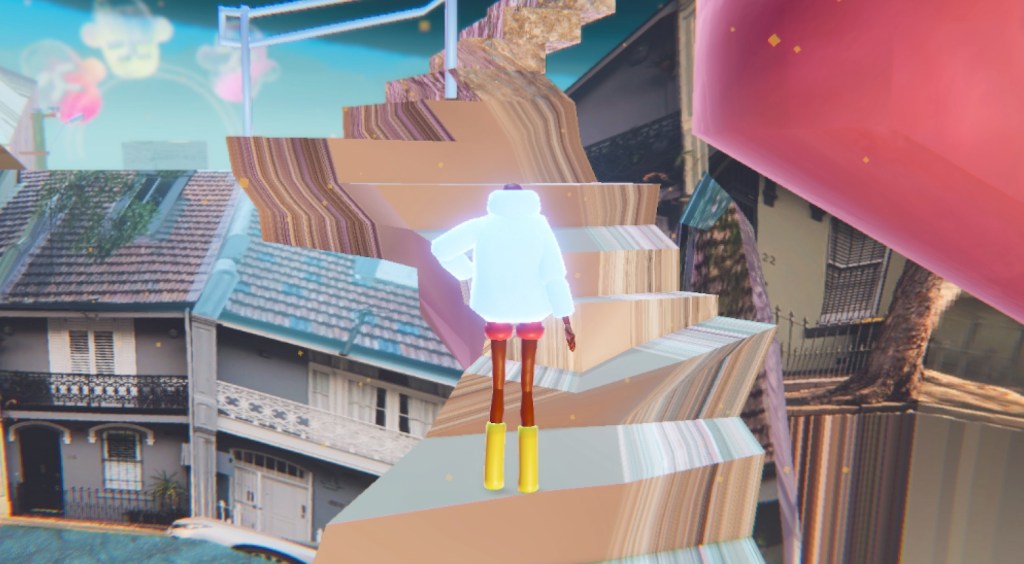 The vaporwave aesthetic was birthed in the era of Web 2.0 – a fully-formed art movement inspired by neon hues, digital glitches, and classic surrealism. Vaporwave art is tinged with nostalgia for the long-gone days of the early internet, and is often characterised by wide, empty spaces, glittering fonts, and objects that don’t belong – dolphins that soar through the air, great pillars that stand in a digital sea, or neon trees made of wire frameworks. Queer Man Peering Into A Rock Pool.jpg adopts this aesthetic for a surreal walking simulator that homages classic anime and the cinema of Tsai Ming-Liang, while exploring how relationships can anchor you in strange and uncanny times.

You play as the titular ‘Queer Man’ – a gangly figure who wanders a vaporwave world trailing questions behind him. With little context in your first steps, you’re required to pick up clues about the man’s pink-and-orange sunset world from slim dialogue and mutterings delivered while each day passes, and the man searches rock pools for answers.

In snippets, the Queer Man explains the state of his world, although this history is couched in metaphor and a lack of remembrance. The man describes the post-apocalypse that birthed his world as a multi-catastrophe event: floods, flames, the churning of milk, the coming of angels, and the end of the world. Later, he ruminates on whether there were robots, too – and asks the data ‘chunkies’ he discovers in the rock pools what really happened.

But the Queer Man’s life is even stranger than the neon pink aesthetic of the game suggests – because while the gameplay loop itself is quite simple, the Queer Man is an enigma, whose secrets slowly unravel over the game’s 1.5-hour playing time. Each time he ventures out, in slow, plodding movements, he stumbles onto new chunkies and discovers larger parts of his world.

To parse the secrets of the chunkies, he places them into his home – which is occupied by a strange, off-putting hole in the ground, known as Admin. This hole speaks in .mp3 files, and does not communicate well with the Queer Man, despite occupying sizeable floor space in his home. But the hole does allow the Queer Man to brush the pixel dust off each chunky, and reshape them into useful items.

The first chunkies become a chair, and a pear. Both are placed inside the Queer Man’s home, and the main quest begins again. Head out into the world, fight the game’s wonky camera to find the path you need, and discover chunkies in each of the rock pools hidden around the man’s world. Some chunkies become practical items in the Queer Man’s hands. When he’s tired or unfocussed, they become strange, warped things – mere memories of the objects that once filled his home.

The art of shaping these items raises questions about the reality you occupy – is it digital? Somewhere closer to reality? Is the Queer Man a benevolent God?

The goal of the experience, based on context clues, is for the Queer Man to restore his shattered world in the wake of a digital apocalypse, with each step slowly restoring the world, and each chunky representing a lost piece of it – and a loss of memory.

This narrative is buoyed by this sense of loss, with strange postcards discovered on your journey illuminating the unseen parts of the Queer Man’s life, and his relationship with a man named Darl. While Darl is largely an unseen figure, he maintains a presence in the Queer Man’s life, with letters penned through the game acting as the man’s lifeline to the real world, and to sanity.

In frantic letters, he questions the state of the world, and asks Darl for help – and while these letters appear to float gently to the Queer Man’s table and rest there without ever being sent, they represent hope in a world turned strange and unfathomable.

Each corner of the Queer Man’s world feels touched by strange and abominable forces, which have turned even the calming, sandy beaches into odd, liminal spaces where empty playgrounds churn, and beach umbrellas sit unoccupied.

At night, this view is made even more uncanny by a giant moon and stars, and footsteps that glow as you walk. The world of the game is dreamlike and ridiculous, occupied by structures that defy reason and logic.

In one segment, the Queer Man descends great steps, and finds himself on a Sydney city street. His local coffee shop is run by a cardboard cut-out, and seems to lack any actual coffee. The shop is barely held together by tape, and the city streets outside are warped and changed – despite the street and parking signs still being very readable.

It’s a walk filled with the familiar – a jaunt so distinctly Sydney that its strangeness stands out with every step. There’s something not quite right about the world of Queer Man Peering, and this unsettling feeling is amplified by this familiarity. It’s left to players to work out whether these scenes are based in reality, or on the Queer Man’s vanished memory.

But while the temptation of the surrealist movement is to leave questions without providing answers, Queer Man Peering Into a Rock Pool.jpg keeps its odd metaphors distinctly grounded, with an end-game sequence that provides satisfaction, and a neat bow for the game’s excellent emotional and physical journey. It’s a deft conclusion – one that doesn’t spoil the mystery of this vaporwave world, but still provides a sense of closure in a heartfelt and gorgeous coda.

This isn’t a game that is surreal for the sake of surreality, or obtuseness masquerading as art. It lacks any pretentiousness in its storytelling, instead using aesthetics as part of the game’s narrative, and to speak to both the state of the Queer Man’s world, and how it reflects his evolving mindset. While the game’s mechanics occasionally hold the narrative back – it’s particularly frustrating to navigate the world with limited movement, and a camera that twists and turns – its power still shines through in each quirky step and discovery.

Queer Man Peering Into A Rock Pool.jpg is an experimental experience, but one that effectively balances its oddness with brilliant storytelling flourishes. This is a game that shines with welcome weirdness, in every twisted laneway and cardboard coffee cutout.

The PC version of Queer Man Peering Into A Rock Pool.jpg was provided and played for the purposes of this review.