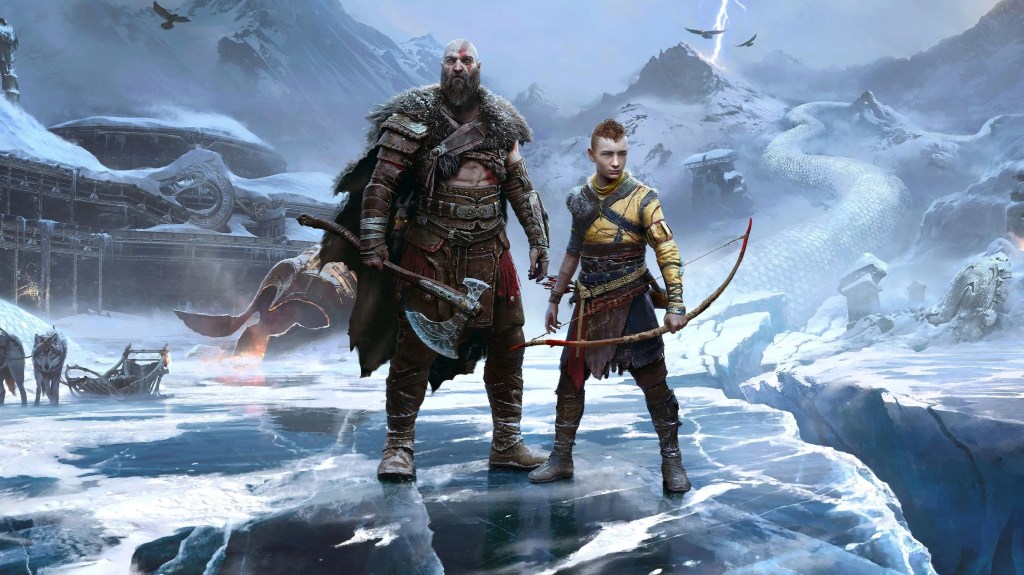 The most powerful weapon God of War Ragnarok wields isn’t the Leviathan Axe, which Kratos uses to cleave through enemies of all sorts in bloody combat. And it isn’t the awe-inspiring set pieces, of which there are many, that feature towering beasts and vast landscapes that make you quiver at the very sight. All those things are remarkable, but what will really take hold of you in Ragnarok are the excellent characters. The strong writing. And the nuanced drama and relationships between mythical people that somehow feels real, believable, and earned.

It’s easy to forget that a game featuring a man whose primary talent is beheading and decapitating monsters has a genuine heart. But God of War Ragnarok doubles down on the soul and emotion of the character drama introduced to the series in God of War (2018) to incredibly good effect, while expanding on the same engaging combat and exploration loop, and continuing to utilise its unique cinematic presentation in effective ways. God of War Ragnarok is an incredibly refined piece of work that never wastes a single moment to captivate you. It leaves a long, lasting impression.

Note: This review will contain light spoilers for God of War Ragnarok. Notable events and moments will be vaguely alluded to, but no specific details will be divulged. We encourage you to read at your own discretion.

Ragnarok continues the journey of protagonist Kratos, the Greek God of War, and his son Atreus, as they continue to live through the fallout of their actions at the end of 2018’s God of War. Their relationship has grown stronger after those events, but as they try to weather the more drastic circumstances of the world, and as Atreus enters his teenage years, it’s clear that both characters still have much more to learn and work on between themselves.

The themes that inform much of the character drama in Ragnarok are more nuanced and mature, given Atreus’ coming-of-age journey and his desire to earn his father’s trust as he enters adulthood, among other things. And even though the events of the overarching plot of Ragnarok are often fantastical and bombastic – we’re dealing with the feuds of Norse gods across several mythical realms, after all – the stakes always manage to feel deeply personal. That’s a great achievement.

The stoic Kratos continues to deal with his past life, and begins to open up to the people now closest to him in genuinely moving ways as the main events of the plot unfold. As in the previous game, every optional quest or activity has some heart to it, making everything feel worthwhile, and an integral part in the journey of these characters. God of War Ragnarok always takes the time to revel in quieter moments, as its protagonists simply enjoy each other’s company, and as the game momentarily ebbs away from the high-octane action and brain-teasing environmental puzzles. The morals and revelations that come from these conversations always feel understated and meaningful.

God of War’s unique take on the figures of the Nordic pantheon does a lot in helping to enable the type of drama (and levity) it sets out to orchestrate. Like the pre-existing performances of comedic odd couple Brok and Sindri, the Dwarven blacksmith brothers, and the Scottish take on Norse god Mimir that allows for both effective gravity and levity, Ragnarok has a collection of new and interesting performances to represent its mythic figures. They can come as quite a surprise at first – especially since some of them have had a number of high-profile interpretations in contemporary pop culture – but all quickly prove their value.

In my preview of the first six hours of God of War Ragnarok, I remarked that the beginning of the game felt like a condensed version of God of War (2018), a brisk run-through to remind you of the (presumably familiar motions) of the first arc of Kratos and Atreus. Immediately past the point of the designated preview section, Ragnarok makes a few notable and significant shifts that help to forge the new, divergent identity of the sequel.

The cinematic presentation of God of War – whereby the entire events of the game are framed to appear from one continuous perspective, like a one-shot Steadicam film such as Russian Ark (2002) or Birdman (2014) – returns in Ragnarok. The effect is just as engrossing as it was in the previous game, but at several points throughout Ragnarok, the camera actually takes its focus away from Kratos, to great effect.

Without going into specifics, God of War Ragnarok’s camera readily moves between different perspectives, exploring individual character motivations more deeply, and creating moments where you know more about the current situation than the characters on screen. It works in creating absorbing drama, raising the stakes, and telling the more elaborate story it wants to tell. It allows Ragnarok to work with a greater scope, feeling like a grander adventure overall, while still maintaining a sense of close intimacy that effortlessly draws you into the screen.

Similar extensions are made in the game’s excellent combat system. In Ragnarok, every move you make in a fight feels weighty and impactful, and the game’s approachable control inputs still allow for a complexity that makes your concerted attempts at strings of attacks feel satisfying and worthwhile. Hitting monsters with your axe feels good, in short, and Ragnarok provides plentiful opportunities to do so, including in downright spectacular fights against larger-than-life opponents.

But Ragnarok also introduces several brand new ideas and abilities to the core combat toolkit – things that go far above and beyond the simple addition of new gear and modifiers, though these things exist, too.

Many of these new additions are focused on fostering a different – and faster – tempo in combat, relative to the existing weapons seen in God of War (2018), as well as creating a different kind of combat dynamic, requiring you to rewire your muscle memory and mental flowchart of how to approach an encounter. These new inclusions are excellent, not only because they inject a new excitement into Ragnarok – especially refreshing after the overly familiar beats of the game’s opening –  but because they also work in making you discover a renewed sense of appreciation for the existing toolkit, when you decide to return to it.

In the same respect, the growing Atreus continues to accompany Kratos as a combat partner, and also comes with his own greatly expanded skillset. Ragnarok also introduces a number of other assistant characters that bring their own unique combat, traversal, and conversational strengths to the table, enhancing your travels through the game’s vast and spectacular-looking natural environments – which feel as if they become more impressive as the journey progresses.

A special mention must also be made for the sheer bounty of accessibility options featured in God of War Ragnarok, which not only seem to include countless, very specific options to cater to a variety of accessibility needs, but also introduce several quality-of-life features as a result. Key to my personal enjoyment of the game was the option to have a persistent dot on the screen to focus on and reduce motion sickness, as well as an option to automatically pick up any retrievable items from the ground instead of pressing a button – an action which you will perform countless times – to reduce strain from repetitive actions.

Nothing about God of War Ragnarok feels anything less than meaningful. Refined to the highest degree, every hour you spend with Kratos, Atreus, and the memorable characters of Ragnarok feels fulfilling – whether it be journeying across the Nordic realms with your companions, taking in the beautiful sights and enjoying idle chit chat, overcoming the odds in invigorating and varied melee combat encounters, or sharing in the deeply emotional connection between incredibly strong and nuanced characters.

By the end, God of War Ragnarok will leave a major, lasting impact on you, with thoughts and quandaries that may well resonate into your own life. It’s exactly what a piece of work of this size, budget, calibre, and intent should strive to do.

The PlayStation 5 version of God of War Ragnarok was provided and played for the purposes of this review. GamesHub has affiliate partnerships. These do not influence editorial content. GamesHub may earn a small percentage of commission for products purchased via affiliate links.