Gibbon: Beyond the Trees Review – A simple message 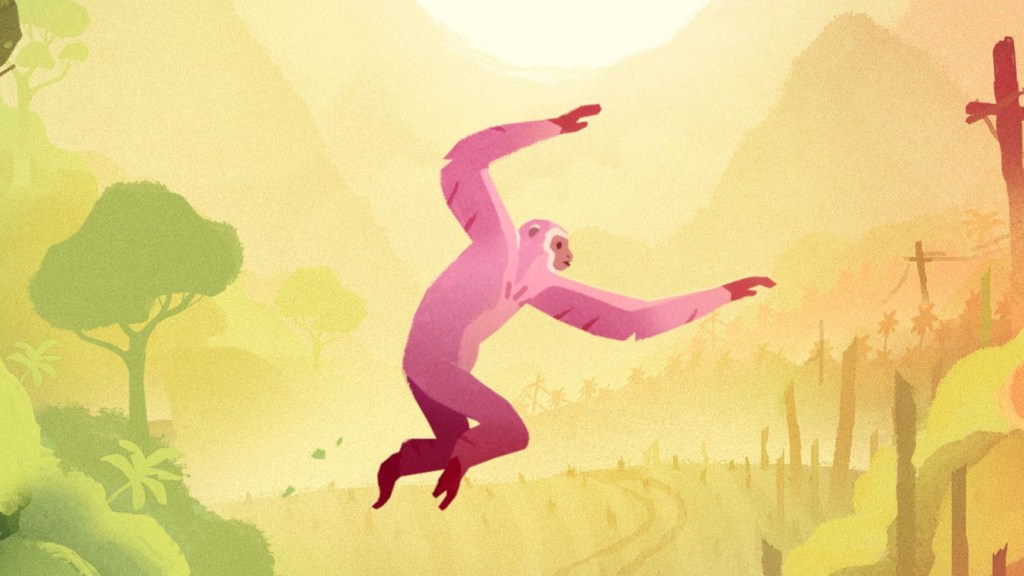 As a straightforward, linear, runner-style platforming game, Gibbon: Beyond the Trees is a beautiful but flawed experience that takes place over a single unbroken run – the game’s story mode takes roughly an hour to complete – through the snaking pathways of Southeast Asian jungle canopies, desolate logging sites, and confusing, multi-layered urban sprawl.

I was surprised by the simplicity of Gibbon.

Holding the right trigger sees your neon pink ape gaining speed along branches and gutters, propelling itself forward with the signature long limbs of the gibbon as you glide along the canopy of gorgeous, hand drawn foliage that makes up Gibbon’s environments.

Left trigger allows you to run along the tops of surfaces, building up speed on downward slopes before releasing and catapulting yourself into the air. Once you’re up there, you can either perform backflips – giving you a boost if you land correctly – or even a delightful acrobatic manoeuvre wherein two apes link hands to launch one of them even higher into the air.

Games like Gibbon: Beyond the Trees tend to live and die on the balance they strike between the satisfaction of a momentum-driven flow state, how punishing they are when you inevitably mess up, and how easy it is to build speed back up again. I have to admit I never 100% folded in my gibbon’s ability to run or slide along surfaces as perfectly as I’d have liked, deferring to the much more reliable swinging ability to cross the majority of the game.

That said, it’s not necessarily a weakness of the game that you can complete so much of it with a single button input. It leaves the vibrancy of the game to come mostly from its wonderful art-style, rather than a combination of mechanics and visuals.

Gibbon: Beyond the Trees shifts through a gorgeous array of palettes and shades over its short runtime, and the natural, flowing nature of the world and its colours are a pleasure to glide through. It’s by far one of the most strikingly beautiful games of the year.

It’s just a shame that the performance I experienced playing the game on Nintendo Switch was pretty abysmal.

Frame drops and and generalised choppiness plagued my entire run, with the issue becoming so pronounced in the built-up urban areas of the game’s second half that it verged on unplayable, as the game’s stuttery performance actively grated against the rhythm that the tiny gibbons on screen were trying to maintain. It’s hard to say whether this is a fault of the game, or the increasingly unsustainable Nintendo Switch hardware, when a 2D runner game like this can have such bad performance.

It’s pretty dire that a game with such simple (yet effective) visuals can bring the hardware to its knees like this.

Even so, what small amount of storytelling there is in Gibbon is still touching. The game’s explicit focus on the habitat destruction of animals hit me hard, and reminded me of films like The Land Before Time or FernGully: The Last Rainforest. In quiet, sad moments, the game asks you to watch as your gibbons frantically escape wildfires or attempt to rescue their offspring from poachers.

The game ends by imploring players to donate to gibbon conservation, and by condemning the social media fuelled obsession with gibbons as exotic pets. The true goal of the game – raising the plight of the gibbon as one of the most endangered primate species in the world – is admirable and touching. If anything, the simplicity in the game’s design only serves to stop this key message from being crowded out.

The Nintendo Switch version of Gibbon: Beyond the Trees was provided and played for the purposes of this review.