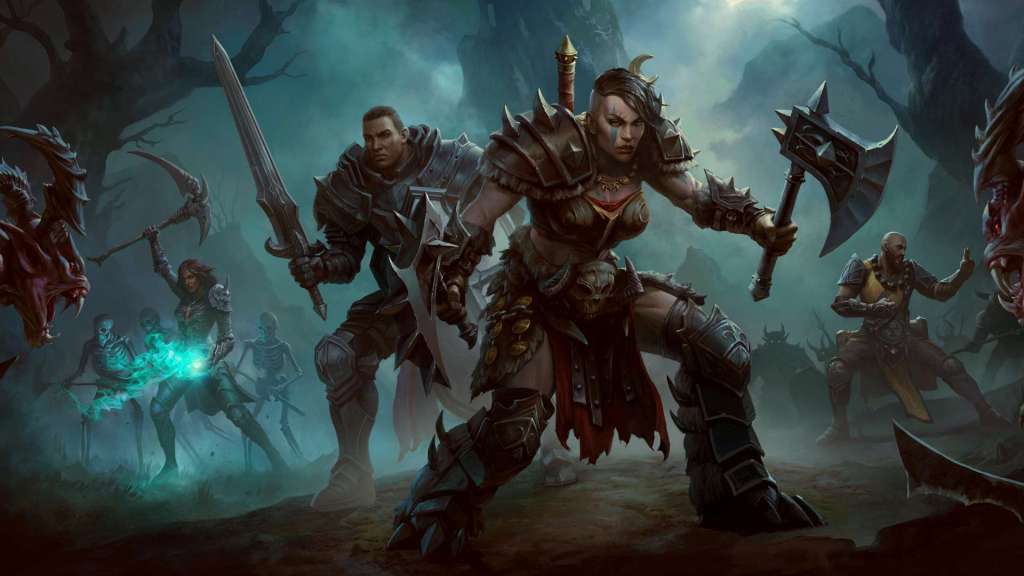 Playing a new game by Activision Blizzard in 2022 has the same kind of feeling as ordering something from Amazon – you’re excited, and really want the thing, but you also feel incredibly guilty knowing everything going on behind-the-scenes at the company making it happen. Workplace misconduct, discrimination, and union busting are things that stay at the front of mind while playing something as big and ambitious as Diablo Immortal; fortunately, the game is also free to play, so you don’t necessarily have to give the embattled company any money.

Diablo Immortal is far from the watered down, casual mobile game Blizzard’s vocal fanbase was initially expecting when the company announced it. In a nutshell, Immortal is basically Diablo 3, a complete PC game experience you hold in your hands. It has the same beautiful, painterly visual treatment, and the hero line-up is pretty much the same, as are the itemisation, combat, and end-game Paragon system.

I’ve played Diablo since its first iteration in 1997. I own a physical copy of ‘The Book of Cain’, and I despised the direction of Diablo 3. The only mobile game I’ve played regularly is Pokemon GO, and the one I developed. For me, the idea of doing anything on my phone that requires more than a simple swipe of my thumb or a lazy tap seems extremely tedious.

So the fact that I’ve played many hours of Diablo Immortal every day since its launch is a peculiar kind of phenomenon that had me curious, and then concerned.

Diablo Immortal takes place five years after the events of Diablo II, and has you once again defending the world of Sanctuary against demons in a bunch of new locations. It features several smart systems and quality of life features to ensure that mobile experience remains enjoyable. The most notable of these is ‘Navigation’, which is kind of like cruise control that allows the player to automatically walk or teleport to locations in the world – which is great, because my hands honestly start cramping up after a while.

But the most confronting part of the game is its introduction of the freemium model common in contemporary mobile games, with its monetisation and vast quantity of microtransactions. As someone who doesn’t really play mobile games, the sheer amount of different currencies and subsystems is mind-boggling. I’ve never experienced anything like it.

It feels like Immortal takes every possible chance to add a new levelling system and resource, with each requiring its own unique menu. You find yourself clicking to ‘claim’ currency more than you click on the goblins to fight them.

And the things Diablo Immortal asks you to pay for with real money seem to solely be game items that increase your chance to get better drops are various stages of the game, like after defeating a particular boss, or fighting through a dungeon activity called an ‘Elder Rift’.

All of which defeats the purpose of the game for me. The rare chance of stumbling across a better sword, or whatever, is the hook that keeps the game interesting.

The actual gameplay loop of Diablo has always been fairly simple; you run around watching the numbers go up, enjoy the pretty effects, and move onto the next bit. Considering this happens just as frequently in the menus of Diablo Immortal as it does in the game world, it fittingly all feels like the same experience. You’re still getting the same validation and reward, just in a different, stranger manner. The Diablo experience seems like it was made for this business model.

This iteration of the franchise has also shifted gears into incorporating MMO elements, so the game feels a little more aligned with World of Warcraft. Blizzard has clearly learned a lot about player retention from their years of hosting The Magical Land of Azeroth, and have applied many of these tricks to Diablo.

Immortal has a much larger focus on forming a party and doing Dungeons with your mates, or joining a guild and running higher-tier Raids in a larger party for the chance of unique drops. It also has factions, where you can choose a side and battle against other players. All of these events also sport their own individually unique daily quests, currencies and levelling systems. Again, it’s mind-boggling.

The amount of work and content that has been put into this game honestly feels endless, and given all the latest news that has come to light about the conditions at Activision Blizzard, it’s difficult to play Immortal and not imagine this wasn’t to the detriment of the livelihood of the developers at some point in time. It’s definitely been to the detriment of my poor hands. I really have been playing it a lot.

Diablo Immortal is built to keep going forever and sustain your interest the whole time. Whether it be the voice acted story, grinding for new loot, levelling your Battle Pass, competing in seasonal leaderboards, hanging with friends, or representing your chosen faction, you will probably be like me; hunched over, trying to stay warm playing this game until hell freezes over – and trying to wrap my head about how it could have possibly all come together.

The iOS version of Diablo Immortal was played for the purposes of this review.

Terry Burdak is a graphic designer, game developer and the creative director of Paper House. He has worked in the games industry for 7 years, releasing the award-winning Paperbark during that time. He is an active member and advocate of the local games industry and has been involved in numerous events, conferences and community events.