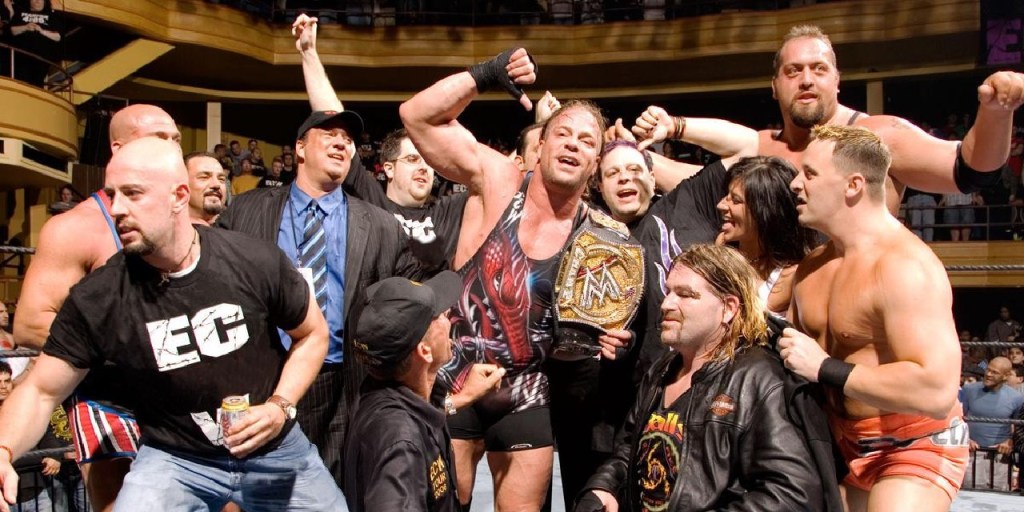 ECW was the underdog of the wrestling world when it was first established in 1992. It was a scrappy and brutal promotion that encouraged violence and creative use of weaponry, and starred a talented cast of wrestlers who would go on to big things – including Tommy Dreamer, Sabu, Terry Funk, Raven, and Rob Van Dam.

While the brand went under in 2001 and was later purchased for rebooting by WWE, it enjoyed a brief, shining moment in the sun. Its popularity was impressive, and even helped spawn a video game adaptation by studio Acclaim, ECW Hardcore Revolution.

But according to new interviews, Acclaim wasn’t the promotion’s first pick of developers – in fact, the game was nearly made by Grand Theft Auto studio, Rockstar Games.

‘It was an amazing time in the wrestling industry,’ former ECW wrestler Tommy Dreamer recently told YouTube channel Hard4Games, as surfaced by VGC. ‘Video games were key for your success as a wrestling company, and we had a lot of companies bidding for that game … There was a fan, who worked for this company, and they were like “man, we want this ECW game to be our number two behind this other game, and it’s revolutionary, it’s a perfect fit for ECW.”‘

‘[We] met, they all came to an ECW Arena show, and this one guy was such a big fan. All this stuff was supposed to happen. They [said], “we just need our one game to hit, and if that game hits you will be our next game.”‘

Due to financial hardships, ECW couldn’t wait for the company to launch their next game, and had to pivot to new targets. If they had waited, the massive success of this title, Rockstar’s Grand Theft Auto, could have had a major impact on the ECW brand.

Hardcore Revolution may also have been a better game as a result; it received mixed reviews from critics, with many calling it a poor copy of other wrestling games (Acclaim had previously held the WWE license).

The fan Dreamer referred to at Rockstar Games was named as Kevin Gill, who VGC credits as being part of the production team for Rockstar’s Smuggler’s Run and Midnight Club: Street Racing. In another interview with Tru Heel Heat Wrestling, Gill corroborated Dreamer’s tale, confirming a deal was in place for an ECW wrestling game developed by Rockstar.

‘I actually put together a deal for Rockstar Games to do the ECW video game,’ Gill said. ‘I had put together a deal with Paul Heyman [ECW founder]. We had a series of meetings, and one weekend I rented a van and brought the whole Rockstar Games team, like a 15-passenger van, and brought everyone down to the ECW Arena in Philly to see it in person.’

‘Video games take so many years to develop, and cost so much to develop. It was put to me like, “do you think ECW will be around in two and a half or three years when we put out this game?”.’

The answer, unfortunately, was no – only a handful of years went by before ECW collapsed under its own weight, and was then salvaged by WWE. Should the Rockstar deal have gone ahead, it’s likely ECW would have disappeared before development was complete.

Like many tales in the video games industry, this appears to be another case of ships passing in the night. An ECW wrestling game by Rockstar Games is a fantastic prospect – but time and circumstances worked against both parties, with dire consequences. At the very least, we’ll always be able to imagine what could have been.