The composer behind Assassin's Creed Valhalla: Dawn of Ragnarok breaks down the influences she drew upon for the score, from black metal to neo-folk.
Meena Shamaly 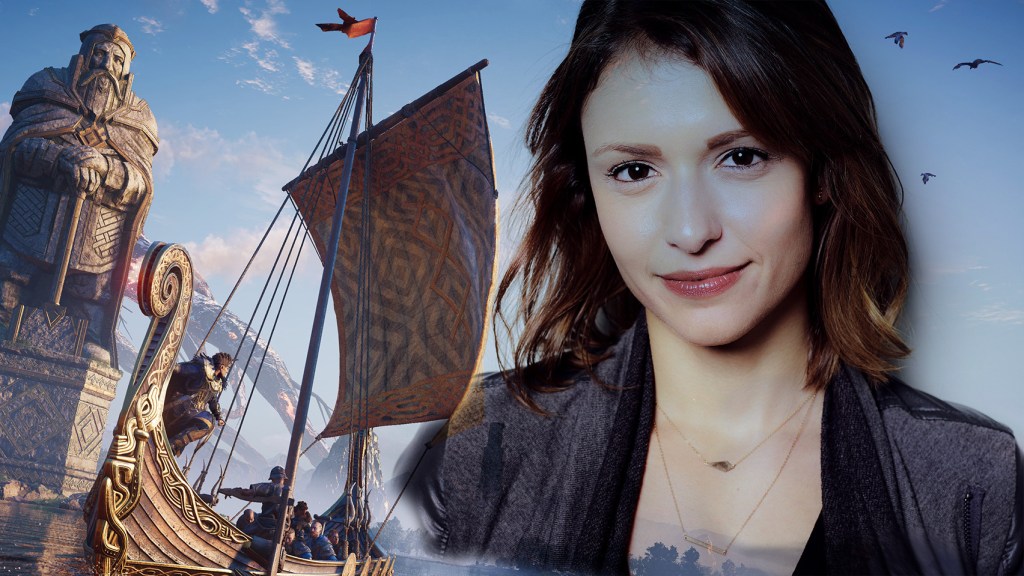 If Viking history is one side of the coin in Assassin’s Creed Valhalla, then Norse mythology is the other. The game’s latest expansion, Dawn of Ragnarok, embraces the latter with a story featuring the Norse god Odin, and it comes with a new electric score by composer Stephanie Economou. This is her second outing in the world of Assassin’s Creed after The Siege of Paris, Valhalla’s previous expansion. With Dawn of Ragnarok, Economou has broken away from the confines of historical fiction, and experimented with soundtracking a mythical realm.

‘I love exploring the different worlds of Assassin’s Creed and conjuring up musical ideas for these stories, so I was grateful to get another chance to collaborate with the Ubisoft team’, Economou told GamesHub.

‘One of the reasons it’s so rewarding to compose music for Assassin’s Creed is that you have these historically-driven narratives, and the music can echo the sounds of that time while still being hyper-modern and edgy and rule-breaking. It was cool to go from scoring The Siege of Paris DLC, which I composed through a largely historical musical lens, to a story like Ragnarok, which is based in Norse mythical worlds. In the case of Ragnarok, I felt I was able to discover a different side of me as a composer, which opened the doors to a new artistic process.’

Before her foray into composing for video games, Stephanie Economou spent years in the realm of film and TV, crafting memorable themes for shows like Jupiter’s Legacy and The Chair. ‘Thus far in my career,’ she says, ‘I’ve composed music for superheroes, Disney warriors, surfing teenagers, hip-hop dancers, stranded astronauts, and Sandra Oh.’

‘I think Sandra Oh comes closest to embodying any kind of god, so Odin felt like the natural next step.’

Dawn of Ragnarok sees Odin journey to the dwarven kingdom of Svartalfheim, facing off with foes of fire and frost, to rescue their son Baldur from the grips of an unkillable giant. To bring this journey and its action to life, Economou found herself experimenting with new sounds and new genres.

‘In early discussions with the creative team, they mentioned wanting the sound for this score to be somewhat of a departure from Valhalla. The game developers were interested in exploring influences of black metal for the score, which I thought was a really exciting and unexpected challenge, so I set out to design the sound of the Muspels, Jötnar, and Surtr (our nemesis) to reflect the black metal style. Much of the score weaves between that tonal palette and a more neo-folk and primitive orchestral lens to give the story the emotional breadth and power I felt it needed.’

As with most Assassin’s Creed scores, Dawn of Ragnarok features a cast of excellent musicians, creating all sorts of sounds, adding to the rich tapestry of Economou’s music.

‘Because I knew I wanted to explore the black metal direction, I sought out some amazing musicians who were fluent in that genre before I had even written a note of music. I grew up listening to System of a Down and other heavy metal bands (Toxicity is still one of my favorite albums to this day), but black metal was a subgenre with which I had less familiarity, so I enlisted the help of Wayne Ingram and his band Wilderun. They are a killer progressive black metal and neo-folk group and I knew that I wanted them to be the primary featured musicians on this score. Wayne introduced me to the music of Bathory, Heilung, and Wolves in the Throne Room, which were great catalysts for getting the inspiration flowing.’

Dawn of Ragnarok also features contributions from Einar Selvik, one of Valhalla’s original composers and musicians, who was involved in both its Nordic folk songs and the game’s non-diegetic score. He was also one of the three composers in Valhalla’s Wrath of the Druids expansion, co-creating its unique Nordic-Gaelic soundscape with Julie Fowlis and Max Aruj.

‘I felt heavily influenced by Ivar Bjørnson & Einar Selvik’s album Skuggsjá‘, recounts Economou. ‘Einar wrote some amazing original songs for Dawn of Ragnarok, and I was lucky enough to have him record vocals on my main theme, which felt like a really special, full-circle experience.’

Beyond virtuosic metal musicians and Nordic experts, the music of Ragnarok also features one of Economou’s childhood friends: vocalist and viola da gamba player, Ari Mason. ‘Ari and I are old friends from childhood, and she has recorded on almost every single one of my projects to date, including The Siege of Paris, where she was a featured soloist.’

‘Ari Mason is, in the most blatant of terms, my creative soulmate. I think every composer seeks to find those “forever” collaborators, be it directors, producers, music editors, or performers. She and I have always shared an unspoken artistic intuition. I can send her a piece of music I might be struggling to make right and she’ll come back with layers of experimental vocal textures, grunting rhythms, folk phrases with Old Norse lyrics, throat singing, and guttural screams. Then she’ll whip out her viola da gamba (she is an ancient music expert to boot) and double up a bunch of my ideas with layers of intertwining plucked rhythms. She’s a wildly inventive musician and she brings vivid color and interpretation to my scores.’

Part of Economou’s signature sound comes from her ability to be both composer and performer on her own scores – an ability she has in common with many other powerhouse composers like Sarah Schachner (another creative force behind the original Assassin’s Creed Valhalla score) and Darren Korb (known for Supergiant games like Bastion, Transistor, and Hades).

‘I’m a very tactile composer. My studio is filled with all sorts of instruments I’ve collected over the years, and a big part of my creative process is throwing up a mic and experimenting with them, regardless of my level of proficiency. I am primarily a violinist and violist, so you’ll hear a lot of live strings throughout the score, as well as vielle, which is the earliest version of a modern violin. I also recorded some growly, rhythmic cello, tagelharpa, bowed lap harp, kantele, mandolin, cigar box guitar, and some scattered vocals.’

‘I love that Assassin’s Creed has allowed me to explore a rustic, primitive sound because it gives me license to play these instruments in a rather crude and basic way. The result ends up sounding raw, rough, and unsophisticated, which I suppose is the happy accident that comes out of me clumsily fumbling around while discovering these amazing instruments.’

As a composer of many years in film and TV, Economou has amassed a wide variety of skills and experiences that have uniquely prepared her for Assassin’s Creed and Dawn of Ragnarok.

‘Harry Gregson-Williams was my mentor for six years, and with him I had the opportunity to write on his scores for The Martian, Mulan, The Equalizer 2, Penguins, The Zookeeper’s Wife, Breath, and Catch-22, to name a few. Harry’s scores are always dramatically different in style and tone, so I grew up being challenged with writing music that was symphonic, hybrid, industrial, electronic, alternative, and quite musically diverse. I feel like this laid the groundwork for being able to confidently conquer various genres.’

‘When I came to Assassin’s Creed, I brought a lot of these stylistic influences with me, along with the production chops I learned from Harry, which I feel allowed me to bring something distinctive to the table.’

By the same measure, Economou’s time with Assassin’s Creed so far has left her with some valuable and refreshing insights into her own process.

‘Working on Assassin’s Creed has completely transformed me as a composer. It has pushed me out of my comfort zone and ‘unstuck’ me from my usual habits. I’m much more apt to discover and experiment with different instruments, with production, and with synth programming. It has freed me from those unconscious mental confines that I think many artists have. I owe a lot to Ubisoft for taking a chance on me. They have helped me reshape and redefine who I am as a composer, and that growth makes me excited about what’s next coming down the pike.’

Assassin’s Creed Valhalla: Dawn of Ragnarok is out now for PC, Xbox, and Playstation.

Stephanie Economou’s Dawn of Ragnarök soundtrack is available to stream and purchase on most major music services, as well as on the official Ubisoft Music Youtube channel.

Meena Shamaly is a composer, poet, and radio presenter who talks about video game music on ABC Classic. He is the composer of Innchanted and a performing musician on Christopher Tin's score for Old World. You can find him on Twitter as @musophrenic.